Five Ways that 1 Peter Challenges our Stereotypes about Apologetic

Most Christians I know are scared to death of evangelism. The fear for many of my friends is that someone is going to ask them a question that they won’t know the answer to. That’s where Christian apologists come in – we may imagine them to be the brilliant philosophical gladiators that we can call in to debate on our behalf and defeat the arguments of the militant atheists or hard-nosed sceptics or at least take them down a notch or two. If there is one go-to proof text for the role of these intellectual champions then it is 1 Peter 3:15.

But in your hearts revere Christ as Lord. Always be prepared to give an answer to everyone who asks you to give the reason for the hope that you have. But do this with gentleness and respect, keeping a clear conscience, so that those who speak maliciously against your good behavior in Christ may be ashamed of their slander.

What does it really say – or not say? Let us take a closer look at this passage in its context to allow its true message to challenge and provoke us into reconsidering a more biblical approach to apologetics and evangelism.

1. IT’S NOT ABOUT HAVING A BRAIN THE SIZE OF A PLANET

In the circles in which I grew up, Christian apologists were the kind of people who were introduced at conferences as “a man…” (and they usually were men) “…who had a brain the size of a planet.” No comment was ever made about any other aspect of this person’s body or life. The brain was elevated as the dominant organ for effective apologetics. But the Bible in general, and Peter’s first epistle in particular, know nothing of this kind of elevation of the brain, which can be incredibly disempowering for most Christians who do not claim to have a similarly proportioned cerebral cortex. Indeed in this very chapter, which begins with Peter specifically addressing women, Peter has also spoken about tongues, lips, eyes, ears, and face – not to mention challenging readers about the beauty of the inner spirit, good behaviour, a clean conscience and a compassionate and humble nature. His ancient readers would have included slaves, women, believers in mixed marriages and those trained in practical professions who would all have been in all probability illiterate, without anything like the philosophical, academic or theological training that the card-carrying apologists of my youth claimed. Peter’s injunction to “always be prepared… to give a reason (apologia) for the hope you have” is therefore unlikely to have meant a formal ‘apologetic’ as seen in most of the apologetics courses that I have seen offered in seminaries or books that bear that title. Peter’s challenge here is not to eloquent academic champions, but to all Christians – simply to be prepared to talk about why and how they trust in Jesus the returning King. This could involve recounting their understanding of the Gospel accounts of the life, death and resurrection of Jesus or witnessing to the love and care they had received from Christians or simply recounting their personal experience of God.

2. IT’S NOT ABOUT WINNING AN ARGUMENT

John Stackhouse once wrote about his experience of going to an apologetics event where a mighty champion of the faith was brought in to his university to annihilate the objections put forward by non- believers. As he listened in to the conversation of some people leaving the auditorium after an emphatic win to the Christian Apologetics Gladiator, he heard someone say: “I don’t care if he won – I still hate him.”1 This listener had felt that the speaker had manipulated the arguments and humiliated his opponents, and so although he may have won the debate he lost the audience. When we share or defend our faith winning the argument is not the final goal. Our aim rather is to honour God. Peter expects his readers to be living Christ-like lives of love and service for those around them. He calls us too to have a lifestyle marked by courage and compassion (see 1 Pet 2:12 And 1 Pet 3:13-14). Our uncommon lives, hopes and aspirations will not only provoke people to ask questions of our faith, but it will prove and corroborate what we say when we are defending our faith. The respect and honour we show even the most hostile of enquirers is part of our worship of God, and winning the listener for Him is more important than winning any argument.

3. IT’S NOT ABOUT JUST WHAT YOU SAY 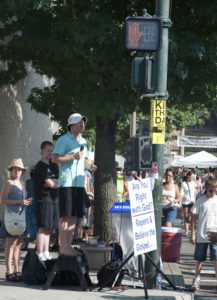 content of the message of any particular medium has about as much importance as the stencilling on the case of an atomic bomb.”2 Peter seems to feel similarly about the tone of our verbal communication when it comes to sharing and explaining and defending our faith: “…do this with gentleness and respect” (vs. 16). I have sadly seen many present an apologetic for the Gospel of peace with an aggressive argument and dismissive tone, and heard others talk about the forgiveness and grace of God whilst point-scoring arguments.

Peter, as we might imagine, seems to be acutely aware of the temptation to speak in an aggressive and combative manner. Instead when handling the powerful truths of the Gospel, he calls gentleness to be our dominant tone. As Proverbs 15:1 states: “A gentle answer turns away wrath, but a harsh word stirs up anger.”

I recently came across a book called Tactics: a game plan for discussing your Christian Convictions which aimed to teach “how to navigate in conversation so that you stay in control… I am going to introduce you to a handful of effective maneuvers – I call them tactics that will help you stay in control.”3 I was uncomfortable with the implicit assumption that other people are objects to be controlled and maneuvered. The book continues to teach its readers the need to employ a military strategy or gamesmanship to keep the upper hand in a conversation with people who don’t share our faith. This does not sound like the kind of respect for human dignity that Peter encourages to be normative for the way in which we relate to nonbelievers. “Rather,” as the apostle Paul said, “we have renounced secret and shameful ways; we do not use deception, nor do we distort the word of God. On the contrary, by setting forth the truth plainly we commend ourselves to everyone’s conscience in the sight of God” (2 Cor 4).

Fundamental to our apologetics then seems to be an open and honest and gentle approach to sharing our personal experiences and the reasons that led us to faith. Practically this may mean that we admit when questions arise we do not know the answers to. It may mean that we recognize when those we are witnessing to are ready to change the topic of conversation. It may mean that we openly invite our friends to church, without the need for any preamble or pressure.

The context of this passage on Christian witness is the prior decision of a believer to “in your hearts revere Christ as Lord” (1 Pet 3:15). This decision to honor Christ as Lord means that He comes first, even if, in extreme circumstances, Christians need to choose between faith and work, or Christian ethics and government. A Christian should be eager to do good even if that good is rejected or contested by the employer or the state. But this statement also implies another aspect of Christian witness. The motivation for a Christian to witness to Christ is the worship or reverence of Christ, and to see Him acknowledged and recognized as Lord. This means we cannot be motivated by the desire that others speak well of us, that we gain the applause of an audience or even the appreciation of a patient. Ultimately it is Christ we are seeking to please. This is true for our spoken witness to Christ as well as the social justice part of our mission. Peter explains that our acts of compassion are to be visible to a watching world so “they may see your good deeds and glorify God.” Just as our words of witness are to draw people to worship God not to show off our intellectual prowess, so our acts of kindness and mercy are to help others appreciate God’s love and not to win us a nomination for a local hero award. This can help us if we are timid in offering words of witness or if we are bombastic in our witness. However articulate or nervous or self-conscious, however generous or people pleasing, we need to remind ourselves often that witnessing is not primarily about us but is rather about the reputation of Jesus.

There is a lot at stake when we seek to share our faith in any context but especially at work. As we have seen we must be careful not to abuse a position of power but we must also not abdicate our responsibility to witness for Christ. In Peter’s day there was a lot at stake for the ordinary people that Peter was challenging to give a reason for the hope that they had. By the time this letter was written it was unlikely that the full-blown persecution of cruel emperor Nero had come to believers. If it had, it would be unlikely that Peter would highlight the verbal abuse that believers would receive.

Dear friends, do not be surprised at the fiery ordeal that has come on you to test you, as though something strange were happening to you. But rejoice inasmuch as you participate in the sufferings of Christ, so that you may be overjoyed when His glory is revealed. If you are insulted because of the name of Christ, you are blessed, for the Spirit of glory and of God rests on you (1 Pet 4:12-14).

Peter also reminds his readers of the insults that were hurled at Jesus on the cross. For us, just as for those first recipients of Peter’s epistle, witnessing for Christ could result in ‘a fiery ordeal.’ We could face insults, censure or ostracism. Peter challenges all of us to be willing to face this kind of opposition. It is one of the indicators that we have a hope that is different to the materialism and consumerism of the world around us.

As I write this article the world is watching as a 27-year-old mum courageously refuse to renounce her faith in Christ in Sudan. Despite having to give birth in chains, being separated from her other young child and facing death by hanging, this young woman has demonstrated a hope in Christ that demands an explanation. Her provocative life of faith is a living apologetic of the truth of the Gospel and the trustworthiness and majesty of Christ. We pray that Meriam Ibrahim would escape the death penalty and be released from captivity in Sudan but we also thank God for the witness of a life well lived for God and ask for His help that we might live such courageous and faithful lives of witness.

Dr Krish Kandiah is the founding director of Home For Good, a young charity seeking to make a real difference in the lives of vulnerable children by finding loving homes for children in the care system. He is an advocate for fostering and adoption. Dr Kandiah has been published in the Times of London and The Guardian, and is a regular broadcaster on BBC Radio 4 and Radio 2. He has written 13 books. His Monarch books include: Only the Brave, Back to the Source, Route 66, and Life Swap. Dr Kandiah holds degrees in Chemistry, Missiology and Theology. He lives in Oxfordshire with his wife and 7 children.