Advance to the Retreat: How the CMDA Canada Western Student Retreat was Started

This article originally appears in April 2018 issue of FOCUS. 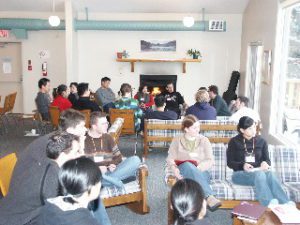 Once upon a time there was no such thing as the CMDA Canada Western Student Retreat. Grab a blanket and some warm milk and gather around Grandpa Staff Person for a story. It was a long time ago…

It’s a story of two Calgary students, Calvino Cheng and Susan Deering, and the original and a very green CMDA Canada staff worker. It all started because of us going to the Student Leaders Conference (SLC). Cal, Susan and I were so encouraged by the SLC, that we came back with the idea that the rest of the CMDA Canada student world would do well with a similar experience.

A vision was born for getting the two Alberta campuses together, perhaps facilitated by the fact that we had no idea what we were getting ourselves into. I have to admit that it did get off to a bit of an unusual start. During our first planning meeting, for example, I feared that I was going to be arrested for impersonating a doctor.

Susan, Cal, resplendent in lab coats and with freshly issued stethoscopes, and myself, slightly scruffy but pretty good for a CMDA Canada staff worker, sat down in the atrium of the Calgary Medical School at the appointed time. It was noisy because there was a group of construction workers doing work nearby. We had just finished discussing several issues when a voice was heard at the other side of the round table: “Are you guys doctors?”

This startled me because the last time I looked in that general direction the only thing that had been there was a large (and rather ugly) statue of Hippocrates. I half imagined that I had suddenly been transported into the

script of Jason and the Argonauts and would soon find myself in a scene battling a statue that had come alive. I was somewhat relieved to see that the question had been emitted by one of theconstructionworkers.“Well…uh,” I started.

“Great! Well, I have this problem with my foot that seems to be getting worse and worse all the time. It started with the just the bottom in the arch, but now it seems to spread to my ankle as well. I tend to be athletic, but I have never injured this foot, although I did injure the knee last year when I had a skiing accident and before that I… and then I… and when I was a kid I….”

While this was going on, and as the details started to threaten to become more intimate, my eyebrows just got higher and higher. Susan had a slight frown on her face which was probably misinterpreted as a look of professional concern. There was no stopping this man as we listened to this parade of concerns that moved from his foot to eventually include his entire medical history. Susan and I shot looks of concern to each other under the hail of seemingly unstoppable symptomatic sentences, while I started to muse about how long I would have to stay in prison for impersonating a doc.

Cal, on the other hand was looking completely relaxed. Leaning back in the chair and putting his arm over the back of the one next to him, he nodded at appropriate times with that look of intense concern that some docs eventually master. Occasionally grunting and rubbing his chin as he listened, he gave the verbose gentleman complete and absolute attention. 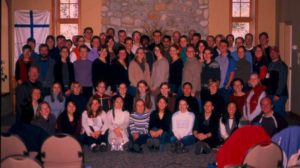 After several moments the man decided that he needed to take a breath and concluded with: “So, what do you think?” Susan and I just looked at each other and had no idea what to say. The ever-cool Cal on the other hand leaned forward, folded his hands, looked over his glasses at the man and said: “Actually, we’re not doctors.” If Cal had produced a large, freshly defrosted halibut from under the table, and slapped him across the face with it, the look of incredulity would not have been greater. After staring at Cal for several seconds, the man responded: “Oh.” An awkward silence ensued after which the worker turned and beat a hasty retreat. We all looked at each other and exercising extreme self-control until the man had disappeared around a corner, finally burst out in laughter. you have to feel for the guy but…

“Now,” I said with tears almost running down my cheeks, partly because I was relieved that I was not going to go to prison, “About that New year’s retreat.” It took us little while to refocus.

Not exactly the echoes of glory that you hear in the beginnings of great heroic endeavours, but we managed to recover, and we divided up duties. Time passed. Stuff happened. I don’t remember if it was Susan or Cal who wrote the brochure, although I suspect it was Cal. He had an interesting knack of being incredibly formal at times at which point he would inject something less formal.

Everything for the first CMDA Canada Canada Western Student Retreat was ready. We had planned, prayed, planned some more, and sweated over a lot of details. We had chosen the first week of January to hold the conference because it was the only time that we could figure out when both the Calgary and Edmonton campuses could get together.

Having overcome the scheduling issues we had produced a brochure that proudly declared:

Just think: when are you ever going to get the chance to hang out with 60+ other Christians from other schools, worship together, and grow closer in fellowship with God and each other? No other opportunity will ever exist in your medical/ dentistry school or during your practice.

God wants the combination of his steady constant calling and warm personal counsel in Scripture to come to characterize us as keeping alert for whatever he will do next Romans 15:5.

It is the first time that something like this has been done and we’re excited as we anticipate God’s blessing on those who come.

Later in the brochure it read:

It is exciting that the entire camp will be run by the teamwork off all schools attending. For instance, the singing and worship teams will be run jointly by all who attend, so bring your guitars, musical instruments, andsuch.Therewillbeampleopportunity for “spontaneous worship”, something that was memorable at the Bolton Conference. It will be awesome to worship and work with one another! In addition, workshops applicable to your life (see application package), “talk with the docs” (two hours of heart to heart with fellow students and a doctor) and finally talks by our guest speakers will round out the weekend. Don’t forget the fun, fellowship and friendships that will develop!

When I read the brochure the first time I started wondering how you could plan “spontaneous worship.” Isn’t that a little like “planning to be surprised” or having an “unexpected outburst of calculated and predetermined joy?” Planned spontaneous worship” was in the same linguistic realm as “jumbo shrimp,” being “slightly pregnant” or saying that something is “relatively unique.” I made a mental note to ask Cal about it and in the midst of all the busyness, spontaneously forgot to remember.

Questionable split infinitives notwithstanding, we had sent the brochures out to our own group in Calgary as well as that of Edmonton. The “60+” part I thought was a bit optimistic, but I wasn’t in charge of writing the brochure. We had chosen an IVCF camp called Pioneer Lodge near Sundry, Alberta as our facility. Given that I had connections with the camp, booking was easy. It was a perfect location approximately half way between the two campuses.

And then, something started to happen.

Word got out to the University of Saskatchewan that something was afoot. A request came in 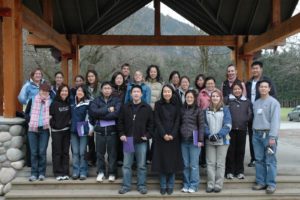 that asked if it was open to non-Albertan students. When discussing this I remember Calvino shrugging and saying, “Why not?” I phoned the camp and told them that the gathering was going to be slightly bigger than we expected. And then we were contacted by the students at the University of British Columbia – a group of students was interested in coming across the mountains in the dead of Canadian winter – a not insubstantial undertaking.

It wasn’t just the students who were enthusiastic either. We also had a great response from the graduate world of CMDA Canada. I didn’t know it at the time, being as green as I was, but the roster read like a “whose who” of CMDA Canada. Those who agreed to help included Dr. John Patrick from the University of Ottawa who was to be our main speaker; Dr. Sheila Harding from University of Saskatchewan; Dr. Wayne Elford (my boss and then Executive Director of CMDA Canada); Dr. Rod Crutcher; who was in charge of one of the University of Calgary’s training clinics; Eric Stolte ,who had just come on as an Associate Staff worker at the University of Saskatchewan (and later President of Navigators Canada); and Dr. Christin Hilbert, president of the Calgary CMDA Chapter (my wife and other boss).

On the Friday evening of the retreat Susan, Cal and I were busily preparing the last details before people started to arrive. As Cal started to put out the prepared name tags I was again struck by the amount of people who were coming. “This is bigger than we anticipated,” I said, trying to sound nonchalant as I looked at the mounting mountain of names. “yeah,” said Cal, who looked at me sideways with a grin and a twinkle in his eye. Somewhere in that twinkle, it made me think that Jesus was going to be coming to the retreat as well. Susan looked up from her laptop with an equally satisfied grin on her face. 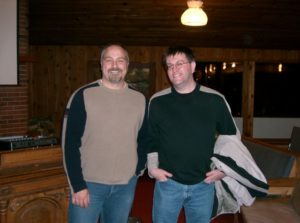 Somewhere in the back of my mind, a question started struggling to form – something that I had forgotten and not been able to address. I scratched my chin and tried to plumb the elusive, intuitive nagging playing hide-and-go- seek in my mind. I looked down and saw one of the brochures laying there and finally remembered.

“Cal, how do you plan spontaneous worship?” I asked, saying it quickly, afraid that I would lose the question as quickly as it had come. I looked up – but he was gone. Cal was across the room greeting a group of students who had just arrived. It’s been twenty years and I still haven’t managed to ask him that question.

Historical note: This meeting eventually resulted in the CMDA Canada Western Canada Retreat, which will be celebrating its twentieth year this January. Special thanks to Cal and Susan whose vision and hard work created a tradition that has since blessed nearly two thousand students. And by the way, Jesus has managed to make it to every one.