Being a Refuge (Student Elective Report)

This article originally appeared in the December 2017 issue of FOCUS.

“You’re going where?! Well that’s just irresponsible and stupid!” These were the words of my loving mother when I told her I was heading to Lebanon to work in a medical clinic. This was not the first time I had heard such opinions, having told my father just a few weeks prior. These words of concern brought doubts into my mind about what I was doing. Was I being selfish in putting myself in “danger” and leaving my family to worry? What if something did happen to me? My poor family… The idea of this possibly being just plain selfishness plagued me. I did not want to be a burden or a cause for worry and yet I still felt called to go to Lebanon. 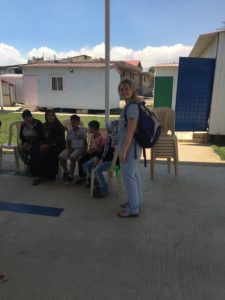 The team, about 8 of us, were set to go to Lebanon for 10 days that would include providing a medical clinic in a church and visiting with refugees. We would be working with a church in a city outside of Beirut.

The church we worked with is a true example of what serving and loving truly encompasses and what it is like to give what you have and see it multiplied. The atmosphere was full of joy and contentment

even though many individuals in the church were refugees themselves and had lost everything. Church members would translate for us in the clinics, take us on home visits and then spend the rest of the night at the church, never once complaining about how much time volunteering and church took out of their daily lives. It seems that they have managed to prioritize that which really matters – that which is eternal. University students would spend hours at the church, translate and assist us, using their only few weeks off from school. Those with jobs would tell us: “I work tomorrow, but I will be here for 8 am the next day when I don’t work” and spend the whole day translating for us. What a stark contrast to the obsession of “the weekend” or “day off ” so pervasive in the western world.

During a home visit, we met two brothers and their families that were living in what could only be called a collection of plastic tarps attempting to form 4 walls and a roof. The one father spent a long time talking to us and became tearful when he discussed leaving

Syria. The section in the refugee camp they lived was full of their friends and neighbors from the same city in Syria. This city had been attacked and the population fled. This family recounted spending days crossing the mountains along with Syrians (about 3000 of which 700 died). The children chipped in and said “yes, we needed to eat grass”. These individuals had fled their home with absolutely nothing. The father was emotional when he spoke of how his children had to step over dead bodies during the trek and that some of the children were old enough to remember the tortuous journey. It seemed as if his feeling of failure as a father filled the air we breathed. Later on, I went and played with the children who had experienced such horror and it was as if they had never felt anything but joy, wanting to demonstrate to me their ability to know the English words for different colours they had learnt in school. It astounds me that governments would not allow such beautiful children to enter their countries.

One observation that struck me was that a fair amount of individuals, adults and children would come to see us with no real complaints but were asking for “something” to be done. 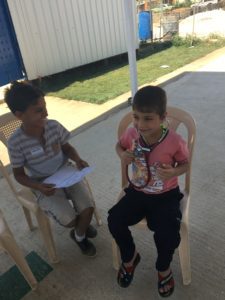 happened to both be my patients. The one complained of markings on his skin that a doctor weeks ago had told him would go away in 6 months but he wanted the markings away sooner and the other came in saying he had a sore throat or ear pain (a common complaint in many of the children). Yet, on exam there appeared to be nothing wrong, if anything a very mild cold. In dissecting this, I realized that for these children there may not have been anything else to do besides come to the clinic. At the clinic they knew there would be team members who wanted to play with them, spend time with them and care for them. Individuals came to these clinics because it was a few minutes where they would be cared for, where the chaos of life in a refugee camp was put on hold, where they could see that humanity still exists, where hopelessness wasn’t so prevalent and where their worth as a human being would be reflected back to them in the care they received from the team.

The majority of refugees are from rural parts of Syria, and many are uneducated making their lives in Lebanon much more difficult thereby increasing the restrictions on their freedoms and opportunities already imposed on them by living in a refugee camp. But what was there to do? Parents had to choose, it was either this, stay in Syria and hope you aren’t in the wrong place at the wrong time, or risk sending your child in a boat to Europe knowing you might never see them again. The main desire the Syrian refugees wanted when we asked was the opportunity to go home. They wanted their country, their culture, and their lives back.

I found this incredibly difficult to write and as such I put it off for months. Writing this required me to sit in the tension of trying to articulate an experience that is nearly impossible to fully comprehend. My words will never come close to painting a picture of what I really experienced. It also required me to go back and relive those experiences, full of deep emotion, longing for how alive and content I felt, the tastes (the food was amazing), smells and sounds. It requires me to acknowledge the faces of the beautiful children, the worn-out mothers and the emasculated fathers, while I am back in my comfortable apartment. It requires me to go back to a place where part of my heart still is and the sorrow that comes with having left part of my heart in a place so far away.

As I begin my third year of medical school, I am supplied with a different motivation.