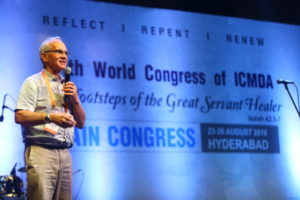 Years ago, a dentist in our building was unable to sell his practice. I intervened and bought his practice and hired an associate and later selling off the added practice to the new associate. He is an outstanding Christian dentist who has remained in our city and is a leader in our church. This dentist and his family have had a wonderful presence in our community.

A few years before I was planning to retire, another Christian dentist and colleague in our building tried to sell his practice. After a significant amount of time, I ended up purchasing his practice because he was unable to find a buyer. I then had the challenge of locating an associate to carry the workload of this additional practice. I found a new grad and hoped he would become a buyer for at least that practice or possibly that practice and mine. After 2 years, this new grad decided to leave Williams Lake and return to school to specialize.

At a CMDA Canada conference in Ontario, I approached a fellow CMDA Canada dentist about possible contacts for an associate to replace the one I was losing. He gave me the name of a young lady who was about to graduate. I contacted her and invited her to consider being my associate. She was graduating from the University of Toronto and was interested in coming to the BC lower mainland, but not up in the country. I pleaded that she come meet me and see the town and the practice. She came and checked things out. She is a fine young Christian dentist. She decided to take up my invitation to practice as my associate. It became clear that she would not consider buying a dental practice in Williams Lake. So, I had help but still no clear path to selling my practice.

I contacted a Dental Practice Broker, who was a former classmate of mine from the University of Alberta School of Dentistry. I had the practice appraised and listed for sale with this broker. My associate was willing to accommodate any transition arrangement. After nearly 2 years, while on a mission vision trip to Thailand, my broker contacted me with word of an offer to buy the entire practice. The sale worked out and I agreed to associate for the new owner for one year. I continued to work off and on for another 2 years before I retired completely from clinical practice in December 2016.

What am I doing in my retirement? That is another wonderful story!

During my time as a dental student, I became a member of CMDA Canada. I was privileged to attend monthly dinner meetings with the Edmonton Chapter. The support and encouragement from the graduates in that group was phenomenal. I realized that the ICCP, the forerunner of ICMDA, was holding a World Conference in Oslo, Norway in my graduation year – June, 1969. This coincided with personal plans to travel with my wife and a Christian medical colleague and his wife in Europe. We attended the World Conference in 1969 in Oslo. Shirley and I attended our second World Conference of ICCP in Toronto, Canada in 1972.  During those conferences, I came to know that Dr. Red Warren, a Toronto dentist and member of CMDA Canada, was on the executive of the ICCP. I remember thinking how awesome an opportunity that was for him.

Over the years, Shirley and I regularly attended the annual National Conference of CMDA Canada. After one of these conferences in 2007, I was asked by Dr. Roger Gingerich, then Executive Director of CMDA Canada, if I would be willing to serve on the National Board of Directors for CMDA Canada. I became the Dental Representative on the National Board in 2008. Two years later, Dr. Gingerich approached me again and asked if I would put my name forward as a Canadian representative on the International Christian Medical Dental Association (ICMDA). At the ICMDA World Congress in Uruguay in 2010, I was chosen as an international board member of ICMDA. Then I was approached by the chairman of ICMDA to consider becoming the Chairperson for the ICMDA board of directors.

As a board member of ICMDA, I have travelled to meet face to face with other board members from around the world once a year. These meetings occurred in Manila, Philippines; Lagos, Nigeria; Seoul, South Korea; Panama City, Panama; Bishkek, Kyrgyzstan; Addis Ababa, Ethiopia; Antananarivo, Madagascar; and Hyderabad, India. As the chairman of the ICMDA board of directors, I have had occasion to travel to Dubai, UAE; St. Albans, UK; Belgrade, Serbia; Duress, Albania and Kiev, Ukraine. I am just returning from a wonderful face-to-face international board meeting and SeaChange Young Leaders training sessions in Bali, Indonesia.

The vision of ICMDA is to have ‘a Christian witness through doctors and dentists in every community in every nation’. Our mission statement is ‘Starting and strengthening Christian medical and dental movements’. What a privilege to be so very involved in a missions dimension of dentistry after retiring from clinical practice. We currently have 84 national movements in ICMDA.

We realize the privilege and blessing of being involved in this ministry. Because God has blessed us richly with good health, a great marriage, and adequate finances, I have a wonderful transition from my clinical involvement in dentistry to international ministry related to dentistry.

As I reflect on choices, circumstances and God’s many blessings, I praise God for His ongoing leading and provision. I could never have imagined so meaningful a transition from clinical dentistry to worldwide missions. Praise the LORD!