Every year, CMDA US holds a leadership conference for dental students called Emerging Leaders in Dentistry. CMDA US pays a half of the travel expense for students to attend and then all accommodations and meals are provided for a nominal fee. Thanks to networking done by CMDA Canada staff person Jon Dykeman, we were informed dental students from Canada are welcome to attend with the same funding support CMDA US offers their own students. This year, Miriam Park, a dental student from the University of Toronto attended.

I first heard about the Emerging Leaders in Dentistry conference through an email newsletter sent by Jon Dykeman, the Associate Staff person for my school. I had attended the CMDA Canada Student Leadership Conference earlier this year, but I found I was just one of two dental students there. When I saw that this conference was specifically for dental students, I knew I wanted to come.

Although less than 30 students attended, I found that most were from dental schools in Southern USA, predominantly the University of Louisville, Dental Collage of GA, University of OK, and University of TX SOD. I was the only Canadian there which certainly put my team at an advantage during trivia night.

The schedule was packed with amazing speakers, who serve both as dentists and leaders in dental ministries. Hearing their stories of actively carrying out the love of Christ through dentistry was truly inspiring to me. Some of them would hold hands with patients praying for healing of their teeth, and others would start every morning through group prayer with all their employees. I have always had doubt about how God’s light could shine through me as these kinds of things are not heard of in Canadian dental offices. But I was reminded that it’s not about me. It’s never been about me. The Lord  calls us to fully surrender to Him and commit to Him. As dental students, we are uncertain about many things, but one the speakers emphasized that God’s mighty hand holds us steadfast and eventually the unknown just gets fun. Someone quoted one of my favourite hymns ‘What a friend we have in Jesus, all our sins and griefs to bear; What a privilege to carry, everything to God in prayer.’  (What a Friend We Have in Jesus, Charles Crozat Conversion & Joseph Scrivas) 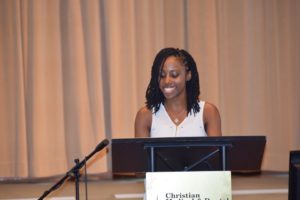 walk with God. One speaker opened up her talk with a picture of a coffin. Her message was how we are not guaranteed anything. Why do we act like we’ll see our own graduation day? Teeth will rot but eternal life will not. Knowing this, she started a bible study during dental school. Many years later, a classmate told her that she had learned to understand that her most valued experiences in dental school were those bible studies. This truly inspired me to help my classmates reconcile their eternal relationships with the Father in this broken world. During the conference, we had a student who didn’t know anybody after moving to a new city for dental school. She then sent an email to her entire class announcing her faith in the Lord and invited everybody to study the word together at lunch — amazingly, 10 people showed up.

Along the same lines, I asked myself what is my purpose after dental school? There was a speaker who decided after graduation to go on mission trips around the world and to commit to God every penny he had left. He came home years later with less than $30 in his bank account. Most students, including myself, are eager to pay off our debts and make a salary. However, he chose the narrow gate that involved sacrifices like financial burdens and starting a family at a later age amongst many other things. When asked during the panel how he felt during those times, all he said was he found true delight and joy in the Lord. That night, I fell on my knees praying for God to show me why I exist. As I prayed, God showed me that I exist to get to know him and I do want to know him. As I learn to chase after the most important things in life, the world seems so insignificant compared to his holiness in my life. 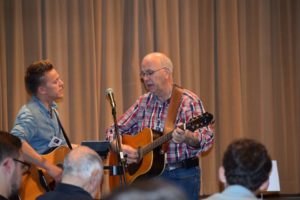 We were shown an illustration and asked, what do you see? For a long time, I couldn’t see anything – it just look like black splotches on the page – but eventually I saw Jesus. The idea being that from this point on, once you see Jesus, that’s the only thing you can see. Having trust and obedience in the Lord transformed this speaker’s life of despair into a multitude of blessings. His son became part of the music group known as Lady Antebellum and he wrote a book about teeth bleaching and it would become the first and only book of its kind available in North Korea. Being half North Korean myself, I really felt a special connection with him for this.

I learned so much perspective about my wrongdoings and values after spending just a weekend in the presence of God and with people who have such a fire for Him. his conference changed my life. I felt incredibly blessed and encouraged to lead a life as a health professional with an emphasis on Christian values. For the first time ever, I truly saw Christian dentists as physicians that bring healing, hope, and restoration to people through physical and spiritual health. As Ephesians 2:10 says, ‘For we are God’s handiwork, created in Christ Jesus to do good works, which God prepared in advance for us to do.’ I am not sure what the future holds, but just being called to do dental ministries is truly a privilege and brings me so much joy and contentment. I will finish with a popular saying I learned from these Southerners, which are to be ‘His hands and feet.’ This image of Jesus hovering over His humble servant at work will stay with me forever.