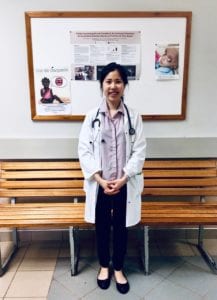 I first came to Angola in 2009 as an undergraduate student with a medical team and it changed the trajectory of my career. Ten years later, I am returning as a first year Internal Medicine resident. Though I came alone this time, I was quickly put to work aiding SIM missionaries who have dedicated their lives to the welfare of the Angolan people.

My medical base was CEML hospital (www.ceml.net). This is a mission hospital founded by Canadian surgeon Dr Stephen Foster (SIM), who bravely came to Angola during the civil war and has remained since. Together with Angolan medical intern Preciosa Bento, we saw patients for pre-natal and medicine consults. We often made educated guesses based on limited information, as patient histories were incomplete and investigations were expensive or unavailable. I slowly learned to adapt my prescribing to the local context. During these consults, Preciosa was an invaluable cultural and linguistic interpreter.

Did you know Angola has many Chinese? I tested my own linguistic ability when a unilingual Mandarin-speaking construction worker presented with what turned out to be malaria.

On my last day at CEML, we celebrated by donating blood to a brain
tumour patient from Cavango who was having surgery. Thanks to God and the skillful hands of the surgery team, the patient recovered and began walking.

“Opapa Yhynysa Nokukulisa” translates from the local language as “porridge that will make you healthy and fat.” Malnutrition in Angolan children is common and multifactorial. One of the main causes is lack of education. Often mothers will wean children with a diluted maize porridge, resulting in gross nutritional deficiencies, stunted growth, poor mental development, and increased susceptibility to infections. 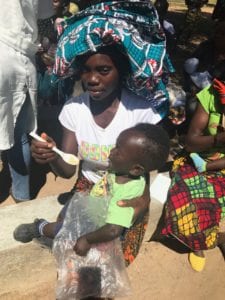 Although high-calorie supplements are in the market, they are foreign-made and expensive. Our team formulated a recipe using local ingredients that could be easily made by the women. The star ingredient is a root called muçua (baobab), which is high in Vitamin C and trace minerals which is added to the porridge.

After testing the recipe with local women, we filmed an instructional video at Centro Médico Rio da Huíla (Tchambangala) to teach women both how to make the porridge as well as the importance of feeding children properly.

I had the opportunity to participate in Ukãi, a social media project formed by Angolan youth to address issues faced by local women. Drawing on my privileged experiences as a Chinese-Canadian and a doctor, my video encouraged young women to develop their personal attributes first instead of succumbing to societal expectation to marry early and have children.

Brazilian SIM missionaries Dr. Haniel and Dr Ana Eller led many community medical outreaches where I participated along with Preciosa and visiting Brazilian medical students. Some places were tours only (Ana Paula – hospital for malnourished children, Hospital Pediátrico Pioneiro Zeca) and in other places we provided free medical care. 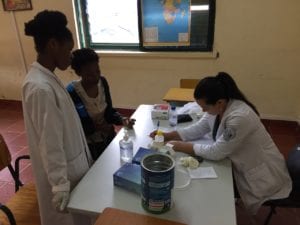 Many women we encountered do not receive any pre-natal care. In addition, they may become pregnant young when their hips have not fully developed in order to accommodate the passage of the baby through the birth canal. Consequently, the babies can get stuck for days and eventually be born dead. The mother can then develop a fistula with leakage of urine or faeces into the vagina which they experience as extremely shameful. At CEML, the medical staff provide free surgeries and care during the long recovery process. The nurses train the women with new skills, such as producing jewellery bags that can be sold. They are also given free housing during their stay and a monetary allowance.