This article will appear in the April 2022 issue of FOCUS. 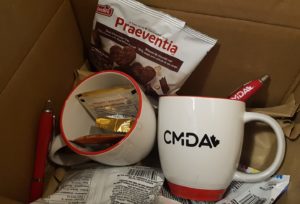 Despite the challenges of existing pandemic restrictions, it was clear that the members of CMDA Canada still needed the refuge provided by our annual student retreats. The pivot to yet another online event was made when it became clear that University restrictions would prevent students from attending in person. The need to be online was balanced with a desire to demonstrate the same level of care for each of the student in attendance. Care packages were assembled for all attendees, which included healthy snacks, a new CMDA Canada mug, some tea, and a handwritten note from our National Office Staff to thank them for registering.

Our thanks to the regional teams who collaborated with the National Office to create a memorable, prayerful, and much needed respite for both students and graduates.

The planning team, led by Dr. David Loewen and Dr. Chris Lipp, swiftly jumped into action to adjust the content to better suit the shorter online program time. Dr. John Patrick provided two plenary presentations – Defending Your Faith and Preserving Your Faith. Dr. Chris Lipp prepared an additional small group discussion section on Spiritual Foundations. Graduate members from across western Canada came out in high numbers to act as hosts and facilitators. Ahead of the event, graduate members donated generously, ensuring student attendance was entirely free. 47 students and graduates joined us for the WSR. Feedback from both students and graduates was generally positive, with many expressing their hope and desire to meet again in person in 2023. We couldn’t agree more!

As with the west, students in the east faced challenging restrictions from their universities, which prompted a move to an online event. Initially, registrations leading up the event were quite low, which can easily be attributed to campus restrictions which were announced prior to the Christmas holiday. Following our announcement that the ESR would be held online, registrations picked up, jumping from a handful to 53 by the day of the retreat.

Dr. Dan Reilly spoke to the theme of Work as God Intended, followed by small group discussion and two very engaging Q&A sessions. The second half of the retreat focused on a panel of 5 graduates who first shared about where they find the joy in their work (with a lead in video from Larry Worthen), and they then answered questions sent in anonymously by the students. The panel consisted of Dr. Peter Hong, Dr. Lindy Scholten, Dr. Amanda Morel, Dr. Jean Chamberlain and Dr. Pierrette Girard. Dr. Jeremy Zung was the MC for the weekend alongside Dr. Alvin Loh, who took charge of leading prayer, including the addition of a special time for prayer in small groups.

The feedback on the retreat was positive and, like the west, included praise for the quality of the online gathering, but a sincere hope for an in person gathering in 2023.

None of this would have been possible without the continued work and diligence of Dr. Dan Reilly, who has led the planning of both the ESR and SLC for many years.