Dr. Sarah Williams, PhD was the keynote speaker for our 2019 National Conference in Vancouver, BC.

The ultrasound technician put her hand on my arm and said the words every expectant mother hopes she will never hear: “I’m afraid there is something wrong with the baby.” 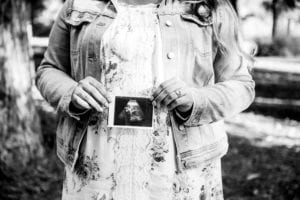 Within an hour it was clear that a skeletal dysplasia would claim my daughter’s life either at birth or shortly after. It was also clear that everyone expected me to have a termination.

Hardly anyone in Western culture disputes the wisdom of prenatal screening. It is a practice that most of us take for granted. But what are the long-term effects?

Though advised, scans are voluntary. It is the informed and consenting parent who decides how to act on the basis of the information they receive. The social practice itself is framed as morally neutral. Yet when I had to decide whether or not to have an abortion, I encountered a system that was anything but neutral.

Technically speaking, at twenty weeks there were only two things I knew about my daughter, both of them scientifically derived facts: her physical abnormality and her biological sex. These facts were discovered simultaneously in a routine scan in which only these two questions were asked as if they were of primary importance: Does this child have a healthy body, and is this child male or female?

Prenatal screening relies on society’s evaluation of what is acceptably normal. In cases of fetal abnormality, termination is assumed to be both right and necessary for a child whose quality of life might prove suboptimal according to this definition, even though in reality this is a highly subjective determination. Only a tiny minority of parents face the heartache of fetal abnormality but asking whether or not a child is healthy, legitimates the idea of terminating the life of a child whose physical capacities are suboptimal, and this idea affects everyone of us. Such an idea is further reinforced by a legal structure that not only makes this idea plausible but also permissible right up to full term.

The debate surrounding Chloe’s Law in Pennsylvania sharply exposed the myth of neutrality when it comes to what information health care professionals provide parents of Down’s syndrome children. In an age that prides itself on upholding the rights of people with disabilities, our failure to critique the latent assumptions that lie at the heart of prenatal screening seems startlingly contradictory.

Furthermore, in an age when the transgender community has highlighted the anguish that can be caused by crude gender stereotyping, we still allow our expectations to be refracted through a gendered lens months before we meet our child at birth. Why do we want to limit the only opportunity we have as parents to welcome our children unconditionally without knowing whether they are male or female?  In many non-western contexts revealing the sex places the unborn child at risk of termination on grounds of gender. Pregnant women face acute tensions, even dangers when forced to navigate the cultural assumptions built into the practice of prenatal screening.

Widening the frame of reference casts into sharp relief the assumptions on which prenatal screening is premised. The practice assumes certain ways of perceiving personhood, defining autonomy and choice, imagining female agency, and forming identity. Each of these values, though purporting to be neutral, is far from universal and subject to political, economic and cultural forces that we assume to be normative in the west.

For policymakers the potential of prenatal screening lies in its power to control the overall health of a population in order to better allocate scarce fiscal resources. Never before has the pressure to mitigate the long-term costs of social care been greater. Government-funded screening programs using affordable and physically noninvasive methods, to which citizens voluntarily consent, have remarkable potential to reduce healthcare costs by eliminating the weakest members of society before they are born. Social engineers have long coveted the power to reshape at source the character of entire populations—a power to which medical insurance firms are becoming increasingly attuned for their own financial gain. Neither government policymakers nor insurance firms are known for championing human uniqueness, and history suggests that in both instances we should pay vigilant attention. It is precisely because such agendas are tacitly condoned by the widespread acceptance of prenatal screening that they become practically impossible to challenge and debate.

Prenatal screening practices reflect—but also shape—our perceptions of what it means to be human. By making personhood contingent upon the majority definition of normality, and by uncritically defining the human person first and foremost on the basis of gender, these practices might actually undermine the core values on which our civil society depends.  Precious though we believe our children to be, screening encourages us to treat them as if they were commodities. We choose the timing of birth; the number of children; but increasingly prenatal technologies are opening the way for us to select the gender and the genetic make up of our children. At a societal level we are becoming less rather than more able to live with actual difference.

Faced with the imperative of choice, I discovered very quickly that although a termination was presented in the language of choice it was the only recommended medical option and the hospital budget was weighted towards parental technologies and stem cell research not obstetric care for high risk pregnancies. My choices were managed prescriptively by institutionally defined policies that anticipated certain kinds of choice and not others. Prenatal screening is not a neutral practice. It sends a message. Though rarely stated explicitly this message is powerful and formative nonetheless. It conditions our expectations and long-term it is creating a certain kind of plausibility structure that is increasingly difficult to resist.