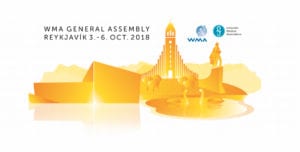 This informal report summarizes some activities and experiences of the group who attended the WMA General Assembly Reykjavik, Iceland from October 3-6, 2018. (Any physician or medical student may become an Associate Member, upon application to the WMA: wma.net/sign-up. Associate Members are apprised of documents under consideration, given opportunity for input, and may attend WMA meetings to voice their opinions.)

We were at the General assembly because we wished to contribute to the discussion of a draft resolution entitled Proposed WMA Reconsideration of the Statement on Euthanasia and Physician Assisted Dying which was to be brought forward to the Ethics Committee of the WMA by the Canadian Medical Association (CMA) and the Royal Dutch Medical Association (RDMA). It was proposed as a replacement for the WMA Resolution on Euthanasia (2002), the WMA Declaration on Euthanasia, (1987) and the WMA Statement on Physician Assisted Suicide (1992, confirmed 2015). The proposal sought to move the WMA away from condemning euthanasia and physician assisted suicide (E/PAS) as unethical. It also moved away from the term physician assisted suicide, using instead either physician assisted death or assisted dying. We felt that this policy would facilitate legalization of E/PAS around the world and involvement of physicians in these procedures. We wished to uphold the WMA opposition to E/PAS and encourage a life-affirming approach.

Delegates from more than 50 national medical associations around the world were present at this GA.  Many of the more experienced participants at the meeting provided us with good advice regarding WMA processes and how to ensure our effective participation. Others sought clarification about an article some of us had co-authored in the September 2018 World Medical Journal, entitled Euthanasia in Canada: a Cautionary Tale (French and Spanish translations available at bit.ly/WMACanada). It was written to counterbalance the optimistic view of the introduction of euthanasia and physician assisted suicide (E/PAS) into Canada that the current representatives of the Canadian Medical Association (CMA) generally promulgate. While the CMA spokesperson at this meeting asserted that our article is a misrepresentation, many participants acknowledged that the extensive references provided would permit them to access primary sources and reach their own conclusions about our analysis of the Canadian situation.

At the meeting of Associate Members, a resolution was proposed that aimed at a greater consistency between policies of WMA and its National Medical Associations (NMAs).  Our group argued that two paragraphs in that policy would weaken the role of WMA as a promoter of the highest standards of medical ethics, because WMA would be expected to “accommodate” NMA policies inconsistent with WMA policies. Our motion to remove the problematic paragraphs was carried. At this GA, summarizing reports were presented by representatives of German, Nigerian, Japanese and Brazilian medical associations on the recent WMA Regional meetings, all opposing involvement of physicians in E/PAS. These consultations on E/PAS conducted by the WMA clearly underscored continued firm opposition to these acts by most member nations. Perhaps because of this, the CMA/RDMA proposal was withdrawn on short notice prior to the Ethics Committee meeting in Reykjavik. It was replaced by a compromise document, brought forward by the German Medical Association, which affirms the WMA’s opposition to E/PAS, but avoids altogether the use of the word unethical and substitutes the phrase physician assisted suicide with physician assisted dying. It was apparent, during the remainder of the meeting, that many at the WMA have serious concerns about these possible changes. Some reiterated that the WMA was founded, in large part, to refute the idea that making something legal also makes it ethical.  The proposed substitute document will undergo study in the months ahead by all delegates and their written opinions are to be reviewed at the April 2019 meeting of the WMA in Chile.

Toward the end of the General Assembly, to everyone’s surprise, the CMA delegation accused the incoming president of the WMA, Dr. Leonid Eidelman, of plagiarism in his inaugural speech and moved that the WMA demand his resignation. This motion failed, not being supported by any other delegates. Subsequently, the CMA announced its withdrawal from membership in the WMA. Dr. Eidelman offered an explanation and apologized to the Council and the GA of the WMA, and his explanation and apology were accepted.

On the following pages is a letter written in response to a request for further information from a Canadian Doctor (name redacted) from the Secretary General of the WMA. It gives some helpful background on some of the events which occurred before and during the WMA General Assembly.