You Are My Witnesses

This article originally appeared in the August 2017 issue of FOCUS.

To be asked how I survived as an academic with my faith intact was an unusual request, but not one that I could refuse, given our Lord’s command that we bear witness.

This, then, is a witness to what God has done over the years. It is not so much about guidance as about very delayed obedience, and prayer, and God’s plans for my life. I was in my mid-forties before faith began to express itself in the context of the university. It was also about that time that God’s faithfulness was powerfully presented to me.

Very much against my will, I went with my family to Zaire/Congo to spend a sabbatical year applying what I knew about the treatment of severe malnutrition in central Africa. I had been privileged in the 1970s to be part of a programme in Jamaica which produced the definitive protocol for the treatment of these children. By 1979 we were achieving results very close to 100% success with growth rates 25 times normal but I was still waiting to see these results work out in practice. By the mid-80’s I knew these results were not reflected in Africa and, to this day, the results are not dramatic if there is no expatriate input for five years, which is a minimal requirement for a demonstration of cultural change. Knowing this, and knowing that predictive models were very inadequate, I was convinced we were missing the biggest factors; hence my reluctance to go to central Africa. But here is where Providence overtook me. 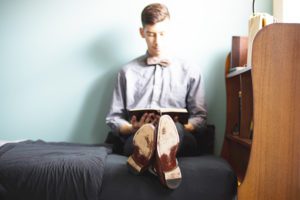 My mother had died of Alzheimer’s a few years before. I kept in touch with my father by phone at weekends. When I told him we were going to Zaire, he said, “John, I have waited 47 years to hear you say that.” I had wonderfully faithful parents, under-educated but with a deep faith and great patience. My father told me that a missionary couple, who had been the means of bringing my mother to faith despite my Marxist, trade unionist grandfather, had prayed for me daily for over 30 years – very specific prayer – for my conversion, for me to become a doctor, and for me to go to the Congo where they were missionaries with WEC. Apart from conversion, these were totally unrealistic prayers but God’s plans are different from ours. I was born into a working class family in the industrial heartland of England, in Birmingham. In our neighbourhood of about 400 families, I knew of only two families who went to church. Before I went to university in 1958 only one boy had been before me. It then turned out, even more strangely, that when I did get to university I was only fit to be an academic.

Even the acquisition of expertise in the area of malnutrition was providential. When I finished my doctorate in cell physiology, I had no thought of doing anything more than the standard, boring academic career. My wife, as she so often does, made me think differently, made me think about finding an application for my work in the developing world. The possibility of a Wellcome fellowship was suggested by one of my junior colleagues. I looked at what was known about malnutrition in the developing countries and found a gaping hole that I could fill. We were heading for Uganda until Amin came into power and the Kampala University was destroyed. Providentially, we ended up in Jamaica at the University of the West Indies for two years and stayed over six. It was an extremely productive period. The science was understood and the treatment of severely malnourished children was 100% successful by the end of the 1970s in Jamaica. The application of this work among cerebral palsy children and cystic fibrosis children in Canada was also successful. God’s plan, however, was bigger. He sent young patients and their families into my life who would convince me to be more open about my faith in the hospital setting. God undoubtedly brings cerebral palsy children and others into our lives that we might learn that God knows what He is doing in this world: the so-called handicapped, for example, do not take a grudge into tomorrow which is more than we can say of ourselves.

In the midst of this work in Canada came the challenge of why the treatment of severely malnourished children in Africa had not been effective.  I needed to be willing to go to central Africa and try to understand how culture and faith interact, how beliefs, both religious and cultural, affect the outcomes of medicine, and how development cannot happen successfully as long as a dominant fatalistic culture persists. A belief in evil spirits offers an explanation of tragedy but does not encourage experimental science. A case study illustrates this.

In the first year in Zaire/Congo, I trained nurses to identify early, and therefore correctable, malnutrition. When I returned after an eight-month interval one of these nurses had had his own child die of malnutrition. This was tragic. When asked what had happened, he said he had not fed him properly, but he refused to look at me, thereby indicating that he did not really believe this. I sent my Zairian supervisor to find out more. In reality, he believed an evil spirit had taken the child’s appetite away and so he had spent his money and his efforts on the witch doctor. Even my university-trained supervisor did not really believe in science. I had him collect data over the next few months but, when he gave it to me, I soon knew it was fabricated. When confronted with this, his response was merely that it was ‘about right’!

I have always believed that the biblical story of redemption is true. Why would so many ordinary Christians in the early centuries choose to die rather than deny their Lord if their Lord was not known and active in their lives? We are loved into the kingdom rather than evangelized, but, because we are human, we must believe some things to be self-evidently true in order to have a starting point for truth to be discovered. This is rational. Atheism is less rational than theism because it is a negative faith which cannot be proved. I have no traditional conversion story. I believe God comes to us, invites us to respond and, when we do, “He gives the power to become the children of God.” (John 1:12) Our job is to work out the consequences of this grace in our lives by the renewal of our minds.

Therefore, when our faith is assaulted by the horrors of medicine, we ought never to yield to our feelings, but instead use our minds and think about what God has done in our lives. Remember to remember. Reading the Psalms every day provides one of the best ways of doing this. Most doctors go for months, sometimes years, without any subjective sense of Christ’s presence. They say nothing about it, thinking they are the only one. It is important to have a support group, particularly during student and resident years in medicine, who ask us every week, “Have you read the scriptures this week? Have you prayed? Have you just lied to me?” They can then pray for us and read with us. It’s called bearing one another’s burdens. Our witness must always be truthful and that means often admitting how frustrated, how empty and depressed we are. Only then can the Holy Spirit work on us, showing us deeper problems, bringing us to repentance and on to discipleship.

The key to survival is always obedience and prayer, not trying to know God’s plan for us. The Ten Commandments can be understood as the ten things God will not tolerate in us. That is God’s law for us today. If you love me, keep my commandments. This is a devastating definition of love but one that can be acted upon because it is founded on obedience. To become obedient, a disciple and follower of Jesus Christ, our Lord has given us the steps we need to take at the beginning of the Sermon on the Mount:

These are very counter-cultural principles but they are the path to true happiness. Paul summarizes it all like this, “Whatever you do, do heartily as unto the Lord and not unto me.” (Col 3:23-24) Augustine gives us a final warning: You will not be held accountable for your ignorance but you will be held responsible for the fact that you failed to do anything about it.